St Thomas More (1477 – 1535) rose from a modest background to become one of the most significant figures in Tudor England. As Speaker of the House of Commons, Privy Counsellor, Lord Chancellor and Lord Chief Justice, Thomas More was second only to King Henry VIII in the realm. 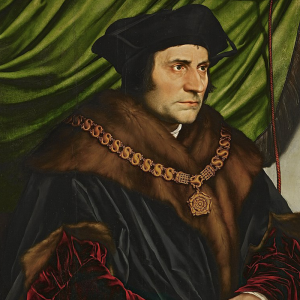 He was a man of genuine and deep piety who seriously considered becoming a Carthusian, but chose the vocation of marriage and public office instead. He had a strong sense of what was best in Catholicism, and left us an insight into his prayer life through his many prayers and devotional writings.

Thomas More was devoted to learning. As England’s most eminent humanist, he was enthusiastic about the new learning of the Renaissance, and introduced it into England. Thomas had a speculative, wide-ranging, incisive and questioning mind. Perhaps he stands unique as an author who coined the word “utopia” (from his book with the same title, about the perfect society). This word is now in common use in all languages. He also took the then revolutionary steps of teaching his daughters the new learning; they were fluent in both the Latin and Greek languages.

Friendship was a central element in Thomas More’s life, and he cultivated a wide and varied circle of friends. He had the capacity for deep, sincere, open, supportive and loyal friendships. The leading lights of Europe were his friends: these included Erasmus (Netherlands), Juan Luis Vives (Spain), and Antonio Bonvisi (Florence). Yet ordinary people never felt slighted in their associations with him.

Thomas More’s difficulties began when his powerful friend, King Henry VIII, demanded his support for the annulment of his marriage to Catherine of Aragon. Soon, this issue was intertwined with Henry’s claim to be the supreme head of the Church in England. Thomas sat with these issues for eight years. He kept his counsel, and only stated his mind after he had been found guilty of High Treason. Thomas then stated that he could see no reason why Henry’s marriage should be annulled, and he refused to countenance Henry’s claims to Church supremacy. Henry’s respect and friendship for Thomas More turned to disappointment, frustration, dislike, and finally revenge. He tried to bully Thomas into submission. In response, Thomas voluntarily withdrew from public life.

In 1534 More was committed to the Tower of London. After refusing to take Henry VIII’s Oath of Supremacy, he was convicted on 1st July 1535 – on perjured evidence – of High Treason, and beheaded five days later.

Thomas More is admired because he was committed to what he considered right and good, and because he was willing to pay the consequences for this stance. He endured his misfortunes with patience and good grace. As he told his many friends who urged him to change his position: Your conscience must save you, and mine must save me. He was a man of immense personal probity and integrity.

Thomas More is respected beyond the bounds of the Catholic Church. He is remembered as an eminent jurist, and a great and fair lawyer: before the law he was no respecter of persons. In an age of opportunistic politicians, Thomas More stood out as a statesman with principles.

Exactly 400 years after his death, in 1935, Thomas More was canonised by Pope Pius XI, and his feast day is on 22 June. He is the patron saint of Catholic lawyers, university students and politicians. He is commemorated by the Anglican Church on 6th July.